SRI and the Rise of the Women Investor

The future growth of Socially Responsible Investing (SRI) may very well be in the hands of women.

I say this for two reasons. First, Women are increasingly driving the global economy. According to a Harvard Business Review article, women control $20 trillion in consumer spending each year. In the next five years this number is expected to rise to $30 trillion. In terms of investment assets their power is also increasing. For example, Morgan Stanley reports that in the U.S. women have decision-making power over $11.2 trillion, or 39 percent of the nation's estimated $28.6 trillion in investable assets. That’s no small potatoes!

The second reason is that women are gravitating toward SRI at a rate that’s higher than that for other traditional investors.  According to a recent U.S. Trust for high net-worth individuals, about half of the respondents said that the social and environmental impact of their investments was important to them. For women, however, this rate was closer to 75 percent as compared to 35 percent for males.

One of the factors that has slowed the adoption of SRI in the past is that financial advisors tend to be older males who got into the business when SRI was considered irrelevant by Wall Street. I believe this is the main reason why a number of the myths around performance and SRI still persist.

Put change is on the way. While only 3 out of 10 advisors are women according to a 2013 Insured Retirement Institute study, 70 percent of women seeking an advisor say they would prefer to work with a woman. As the percent of female advisors rise, they will likely become a positive force for SRI. A recent Calvert Study found that female advisors are more interested in using SRI funds (60 percent) compared to their male counterparts (40 percent).

An Increased Focus on Gender Diversity

One area within the socially responsible investing community that has changed as a result of women investors is the importance of gender diversity, particularly in regards to percentage of women in senior management positions and on boards of directors. For many women investors especially, the willingness of a corporation to increase their gender diversity has become a key factor for judging a company’s commitment to environmental, social and governance (ESG) criteria, as women are more likely to view these issues as important. The push for gender diversity is linked to pushing businesses to open up in a host of other reporting areas, from tax and executive compensation to anti-corruption and sustainability programs.

Global wealth demographics are likely to continue pushing this trend investment further. Women—or at least some women—are richer now than ever before. And they’re soon to get even richer.

Taking the U.S. as one example, women now control almost half of the estates valued over $5 million and they stand to inherit some 70 percent of the $41 trillion to be inherited over the next four decades in the largest intergenerational transfer of wealth the world has ever seen. By 2020, roughly two-thirds of the private wealth in the U.S. will be held by women. 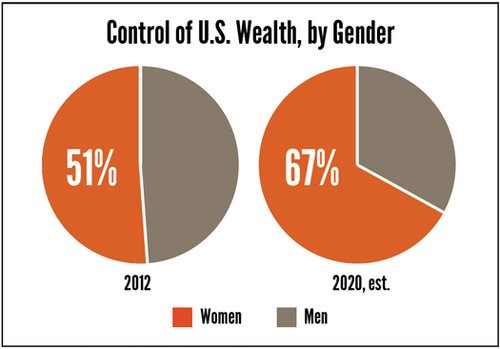 With the rise of the women investor, SRI should continue to grow over the next decade and beyond, likely outpacing the growth of assets under management generally. Issues like gender diversity will become key considerations for companies wishing to attract investor’s dollars. This will only help the cause of SRI even more, as studies show that when women serve on boards and in management, companies are more likely to focus on mitigating environmental and social risks.

Through their investment dollars, women are helping to reshape the investment landscape and how Wall Street thinks about investing.  They are also helping to reshape the corporate boardroom and the way management decisions are made. For example, a study by the Hass School found that companies with more women on their board of directors are more likely to invest in renewable power to improve operational energy efficiency, manage for climate change risk, reduce the environmental impacts of their packaging, protect biodiversity and stop supply chain abuses of workers.

Halla Tomadottir, executive chair of Audur Capital, puts it this way, “Women and sustainability are two sides of the same coin …. Corporations build better societies if they have balanced boards.” The voices of women are critical in advancing the goals of corporate shared value. SRI and women investors have a lot to say in making this happen.

As sustainability becomes more of an accepted practice, all companies will face increased pressure to report metrics related to environmental, social and governance issues. I anticipate, as most proponents of SRI do, there will come a time when such integration becomes the norm, and funds and advisors that ignore these issues will move to the margins of the investment community. That’s good news for women, investors and the planet.

Disclosure: This commentary on this website reflects the personal opinions, viewpoints and analyses of the DeDora Capital, Inc. employees providing such comments, and should not be regarded as a description of advisory services provided by DeDora Capital, Inc. or performance returns of any DeDora Capital, Inc. Investments client. The views reflected in the commentary are subject to change at any time without notice. Nothing on this website constitutes investment advice, performance data or any recommendation that any particular security, portfolio of securities, transaction or investment strategy is suitable for any specific person. Any mention of a particular security and related performance data is not a recommendation to buy or sell that security. DeDora Capital, Inc. manages its clients’ accounts using a variety of investment techniques and strategies, which are not necessarily discussed in the commentary. Investments in securities involve the risk of loss. Past performance is no guarantee of future results.